The wedding ceremony is always a special ceremony in every Vietnamese family. Although there is no history record of these South marriage procedures, but thanks to the form of word of mouth, traditional ceremonies are preserved and promoted to this day. The wedding ceremony is an occasion to show the traditional quintessence and features of Vietnamese national culture.
Weddings in Vietnam include rituals bearing the traditional culture, however in each region, they have a distinctive feature. Procedures for marriage in the South, where the people have a liberal personality, the rituals are made quite more relaxed and gentler, but still need to ensure solemnity and sacredness.

A charming, beautiful and colorful country will inspire in order you to take the perfect photos.

Coming to Vietnam for photography is your correct choice and many professional photographers from different countries got success with plenty of photographic masterpieces in a place where has friendly people, rich food, diversity of markets from plain to plateau.

97 million people live in a small country with variety of very interesting things and there are only photographers who save every moments everytime, everywhere.

This is a great journey to discover traditional wedding in the Southern Vietnamese villages”. 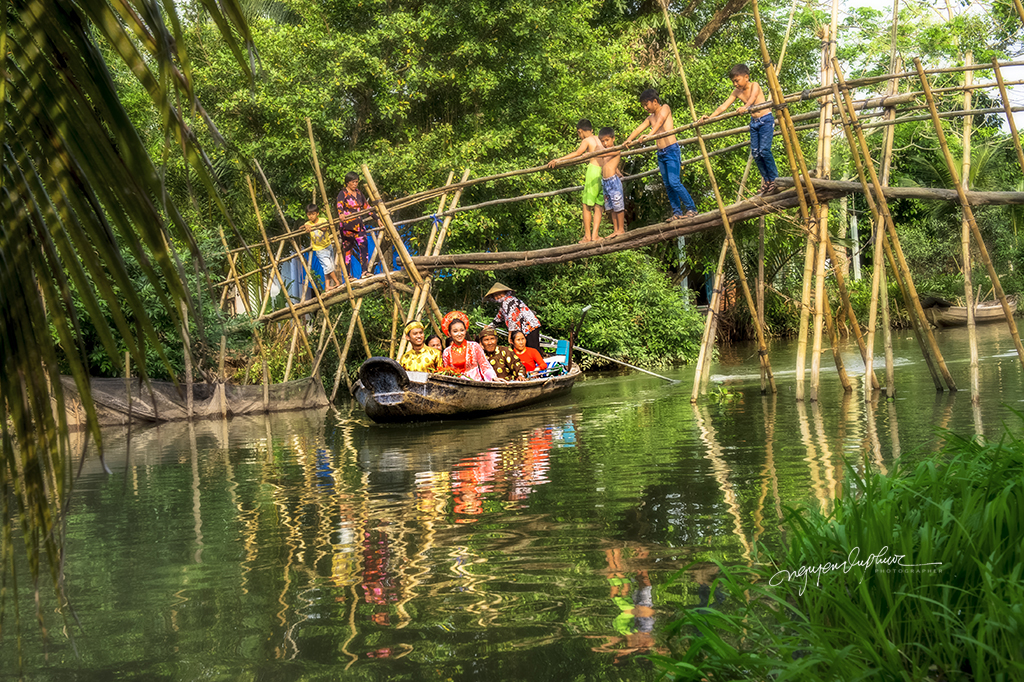 Starting from Sai Gon to Can Tho at 6am - taking photos along the roads of the fields, the people living in the local areas (My Tho -Vinh Long).

Having breakfast at My Tho.

Having lunch in Can Tho.

Checking in hotel and taking photos of a Chinese temple in Can Tho.

Having dinner in Can Tho, taking photos of sunset scene on the Mekong River with boats parked at the river dock. 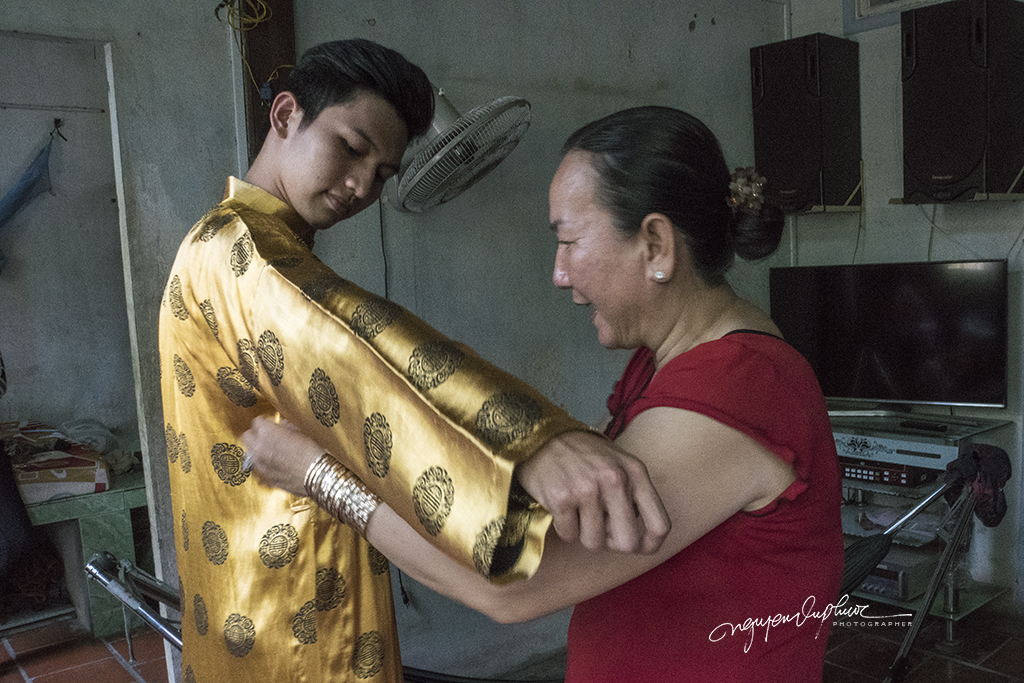 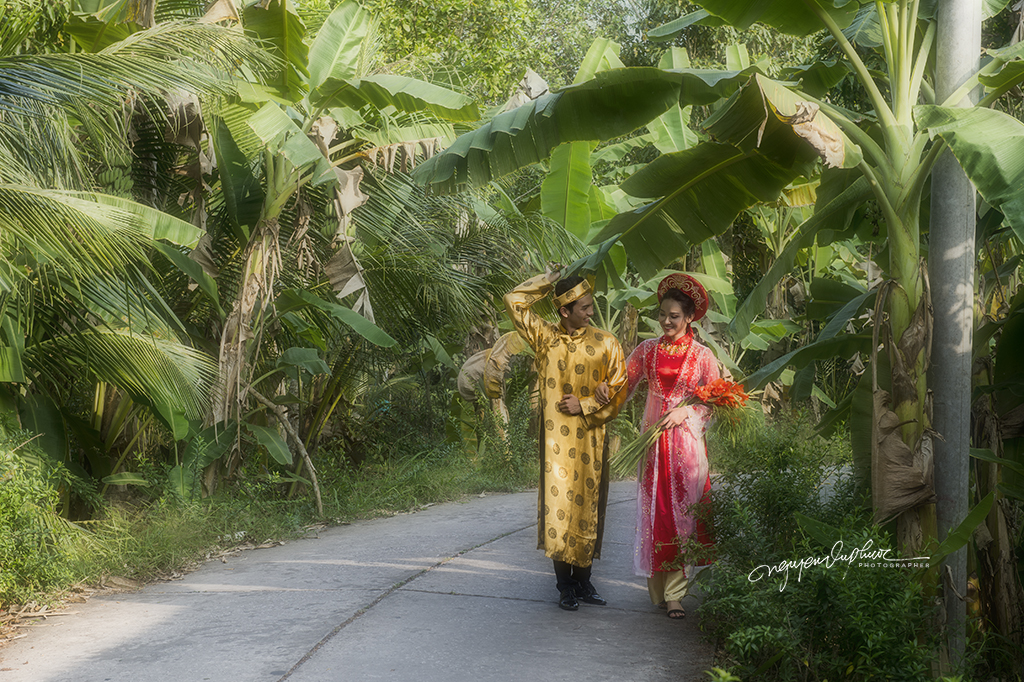 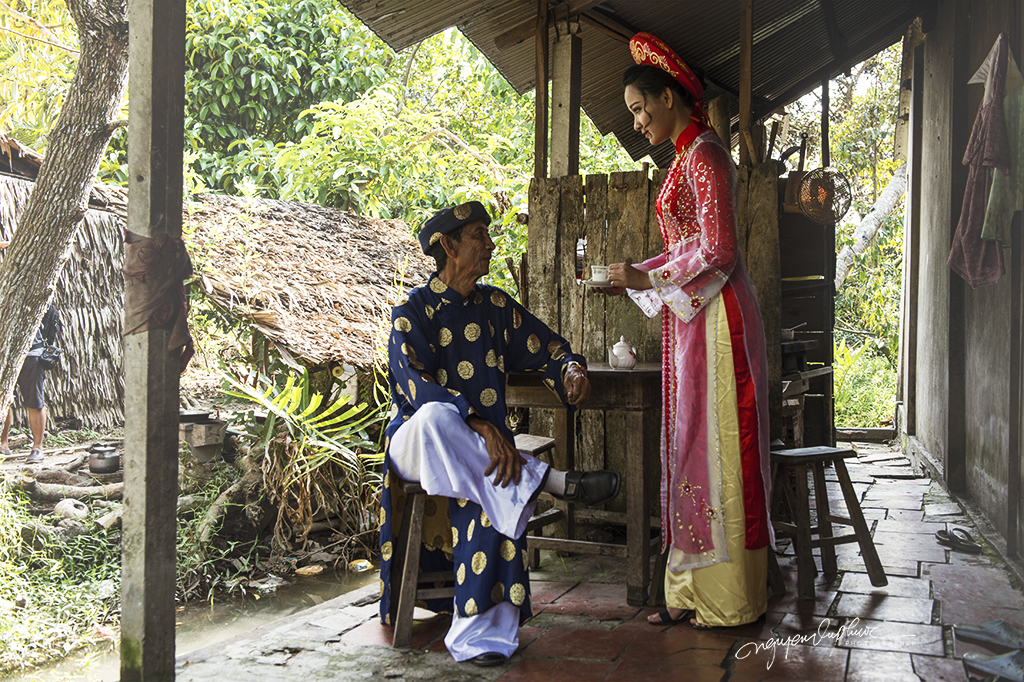 DAY 2 : Wedding photography day (the main concept of the tour)

4:00 Moving from hotel to shooting place.

5: 30- 7:30 Taking photos of sunrise scene on the river, in which there is a scene of “bridegroom's family” going to pick up the “Bride” on the river boats moving through the small riverside with the charming countryside landscape.

8:30 9:30 Taking pictures of the bridegroom’s family at the bride’s house and simulating the wedding rituals.

9:30 11:00 Taking pictures of the bridegroom's family picking up the bride on a boat through the river.

11:30 Guests join the reception with the two families in the form of real wedding.

13:00 Finishing and bringing guests to Saigon. 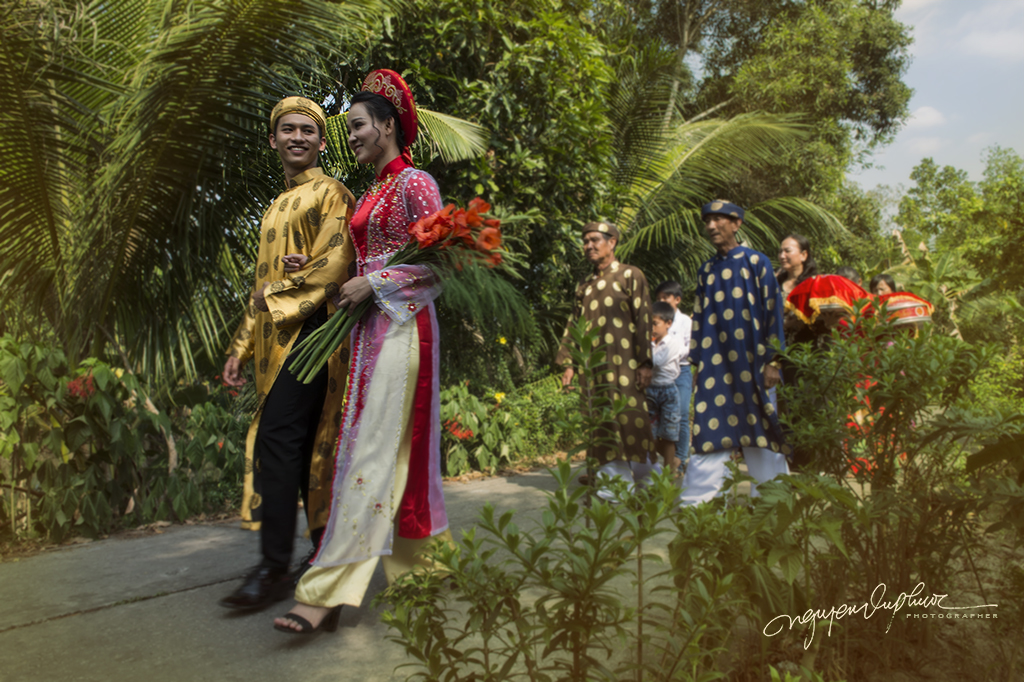 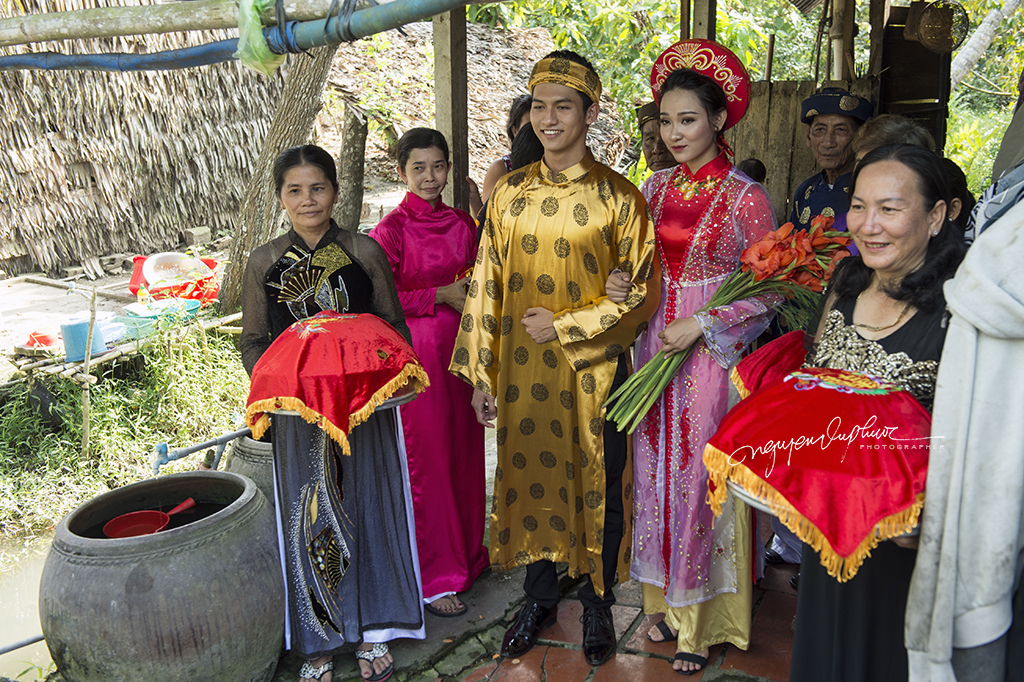 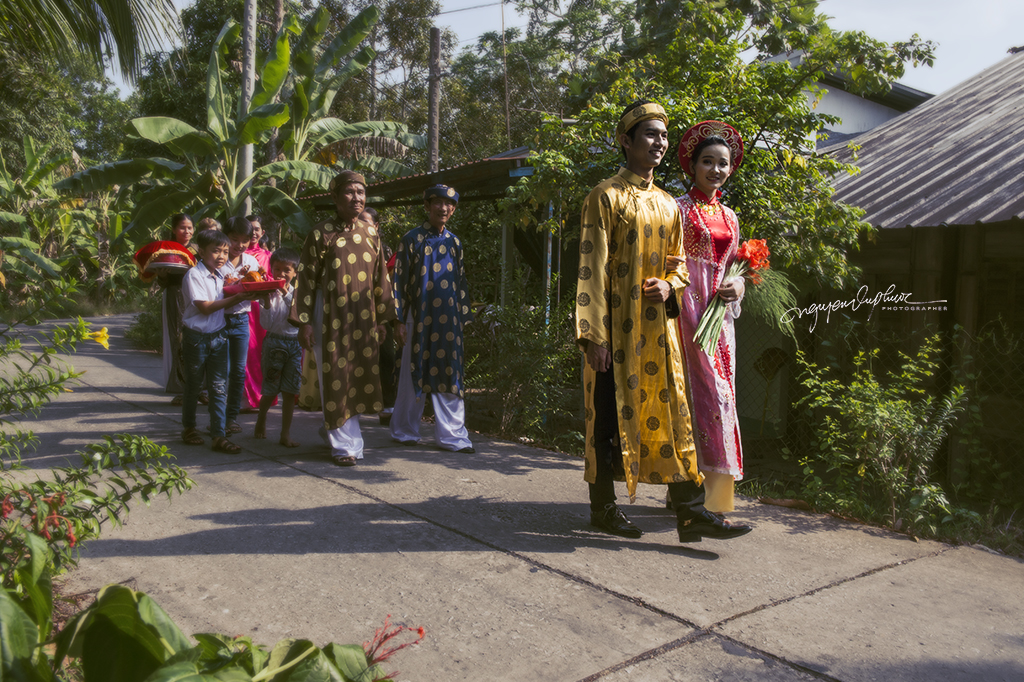 Tour does not include:

A good guide to take photos, have beautiful photo works.

Number of characters are 12-20 people

Among them, the bride and groom characters are the main characters in traditional weddings selected from professional photography models.

To ensure good shooting angles and conditions in the event, the number of photographers are up to 10 people

Weddings in Vietnam include rituals bearing the traditional culture, however in each region, they have a distinctive feature. Procedures for marriage in the South, where the people have a liberal personality, the rituals are made quite more relaxed and gentler, but still need to ensure solemnity and sacredness.

The wedding procedure in the South is still carried out with all the rituals – marriage proposal, pre-wedding ceremony, wedding procession.

However, different from the custom of the North, if two families in the South are far from each other, they can skip the opening ceremony, conduct a common ceremony and pick up the bride on the same day. At that time, the ancestors and wedding offerings when receiving the bride will also be combined.

Our photography program is “stimulating” all the traditional wedding procedure so you can visit and take photos at each stage of the ceremony. It is also an opportunity for you to learn more about Vietnamese marriage culture in each region of Vietnam.

The wedding in the Southern Vietnamese village is an attractive and very meaningful tourist photography program and also a special point when you come to Vietnam. It will be very interesting to see a kind of indispensable ritual, culture of Vietnamese people, which everyone has to perform once in their life.

The order of Southern marriage’s procedures

Marriage customary practices of each region will be different from North to South. Particularly for the procedure of Southern marriage, the pre-wedding ceremony is usually not too finical but not so there are no separate standards that the bride and groom need to pay attention to. 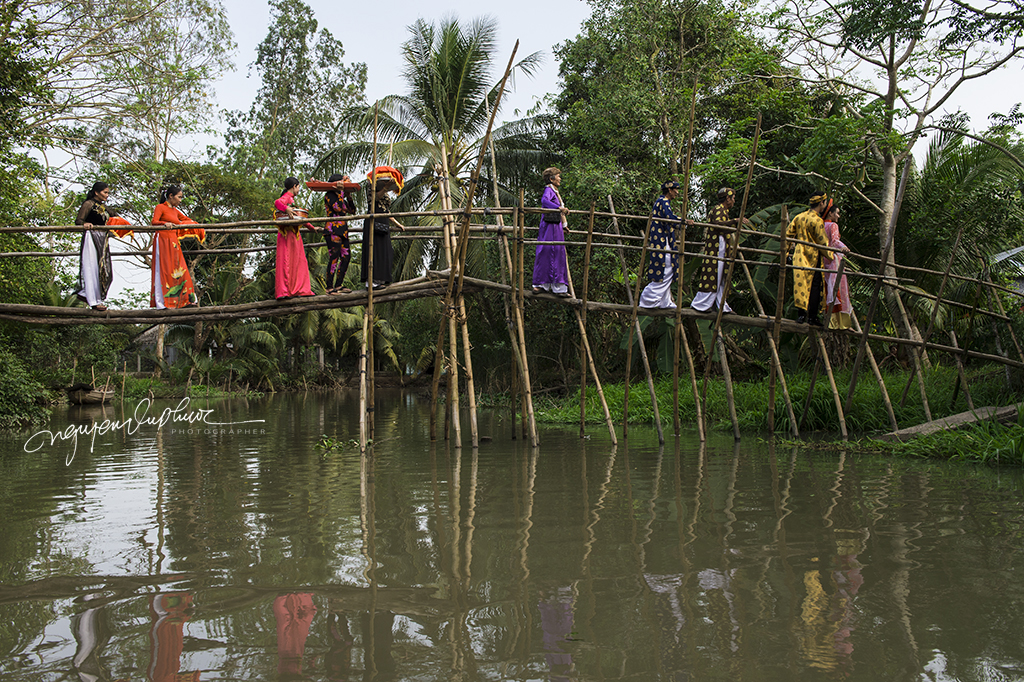 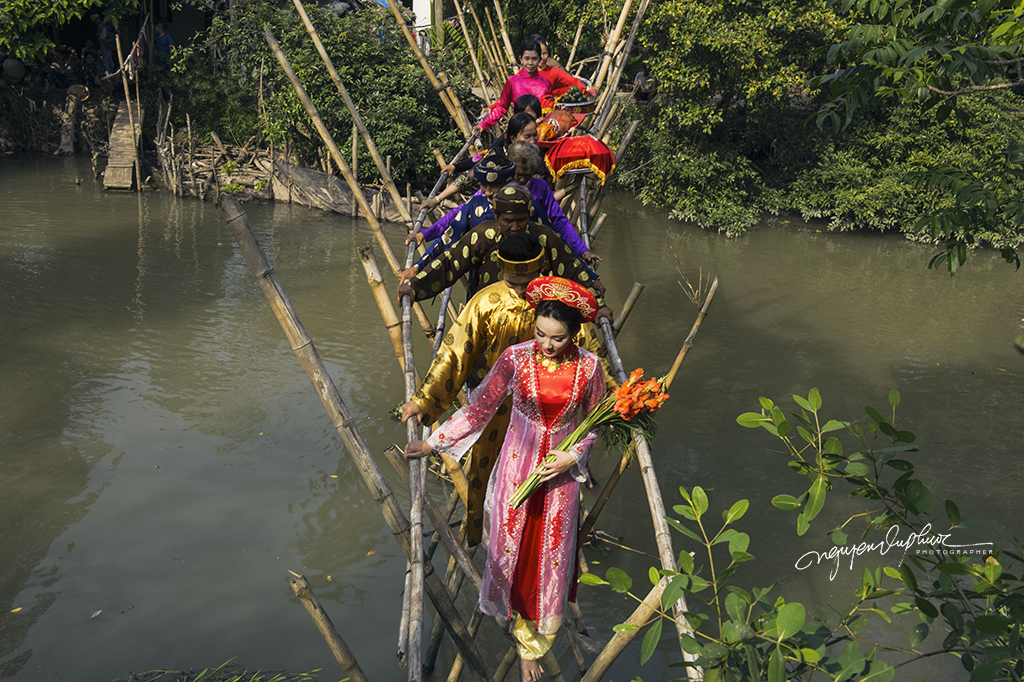 DETAILS IN THE WEDDING WEDDING CEREMONY

-According to traditional Vietnamese wedding customs, the wedding ceremony are celebrated at home

-When the bridegroom's family comes, there are a matchmaker going first and a head of the clan,

the groom gives a tray of wine;

Accompanying him are the grandparents, parents who go in double; the four of six man and woman hold offerings.

-The offerings brought to the girl's house in addition to fruits, candies, must have betel nut, big pairs of lamps (candles), coinciding with the size of the candlesticks on the altar of bride’s family.

-The head of the bridegroom’s clan will ask permission from the bride's family to enter the offerings for the wedding,

When the girl's family agrees, the bridegroom’s family will take turns in and officially perform wedding ceremonies and ceremonies.

-The bridegroom’s family will respectfully invite the bride's family to drink tea, drink wine, invite betel nuts, the two sides discuss and agree on marriage of the bride and groom and perform a ceremony to donate jewelry to the bride.

-The most important and sacred ceremony at the southern wedding is the ceremony to light up.

(This is an indispensable ritual in marriage procedures, which is an official statement, a strong bond between the bride and groom throughout life.)

Two big candles brought by their family members will be placed solemnly on the ancestor's altar.

- The head of the girl's family proclaims: "Please make a light up ceremony," the bride and groom personally lit candles from the fire of a small “duck egg oil lamp” on the altar (fire incense).

-According to the procedure of marriage in the South, the head of the clan will open a bottle of wine in the offerings that his son brought and stand in front of the altar, the bride and groom stand on both sides, silent.

-Then the bride and groom will plug the lamp into the candlestick.

Two lights burned slowly, placed close to each other because the ceremony was applied to the hands, like prayers.

Then the head of the clan will give two assistant lights to plug into the candlestick. Two lights must burn slowly and evenly, if the fire is different, it is said that the bride will “overpower her husband”.

-After that, the procession of the bride to the groom’s house will be conducted

-When the two of them were fully present at the house of the son's family, the groom will pour wine for the head of the family to declare and celebrate the marriage.

Currently, in addition to holding family weddings, young people also hold wedding ceremonies in restaurants. The ceremony depends on the requirements of the bride and groom or each restaurant is a little different.